Last weekend we celebrated my daughter’s 5th birthday. I still can’t believe that my baby girl has turned 5 and will be heading off to school next year. Sometimes I wish I could just stop time and enjoy these early years just a little longer.

Last year my daughter chose a Rainbow theme, so I was curious to see what she wanted this year. I figure that since she’s old enough to say what she wants (which she does often), I wanted to get her involved with choosing a theme and helping get everything ready.

This year she chose a butterfly party.

Last year I heard about a company that brings live butterflies for birthday parties and thought that would be perfect. When I spoke to Marie-Claire at Butterfly Adventures, I knew that my daughter was going to love it.

I wanted to make some decorations for the table, so I purchased some gorgeous milk glass plates from Petite Portions and borrowed some glasses domes from my lovely friend Daisy at Leo & Bella. I then grabbed some twigs from the local park and cut out some butterfly clipart that I printed from the internet and made two of these table decorations. 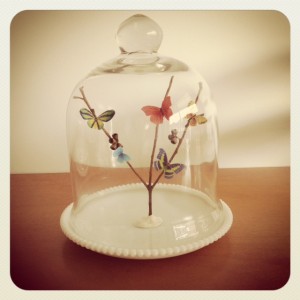 I also wanted something to hang above the table and had seen some butterfly lanterns on Pinterest that I knew would be perfect. I bought some white paper lanterns from the local $2 shop and attached some more butterflies that I had printed. 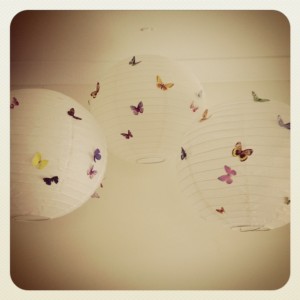 I saw some amazing edible butterfly decorations on Etsy awhile ago and knew they would also be perfect (and an easy way) to decorate the cake. I made a two tiered buttercake with vanilla buttercream icing and decorated it with the butterflies. My daughter gasped when she saw the cake for the first time, so I know that she loved it. 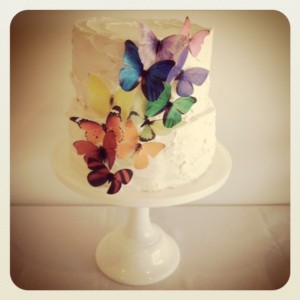 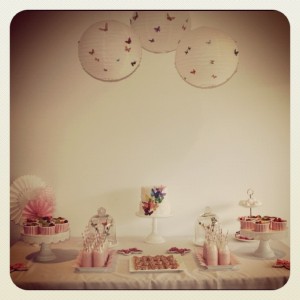 The butterflies were amazing and all of the children enjoyed learning about butterflies, colouring butterfly pictures and going in the tent to feed them (who would have guessed that they love to drink gatorade). 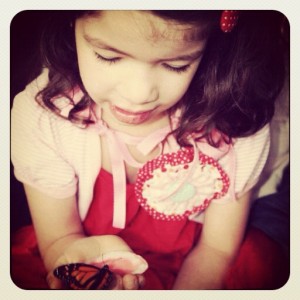 Hallelujah! I did it.

After years (well actually decades) of collecting recipes that I have torn from magazines, news, books or printed from online, I have finally sorted them and will now actually be able to find what I need.

I’ve lost track of the number of times I have started & stopped this task, so I made a public announcement a few weeks ago on my facebook page, telling everyone that by the end of this month I was going to have them sorted.

I thought by putting it “out there” it would motivate me to get organised and guess what, it worked. A couple of times I was ready to throw everything back in too hard box, but I was dreading telling everyone that I’d given up.

Here is my collection of nearly 1000 recipes that I have been collecting since high school that were overflowing from boxes and cupboards around the house. 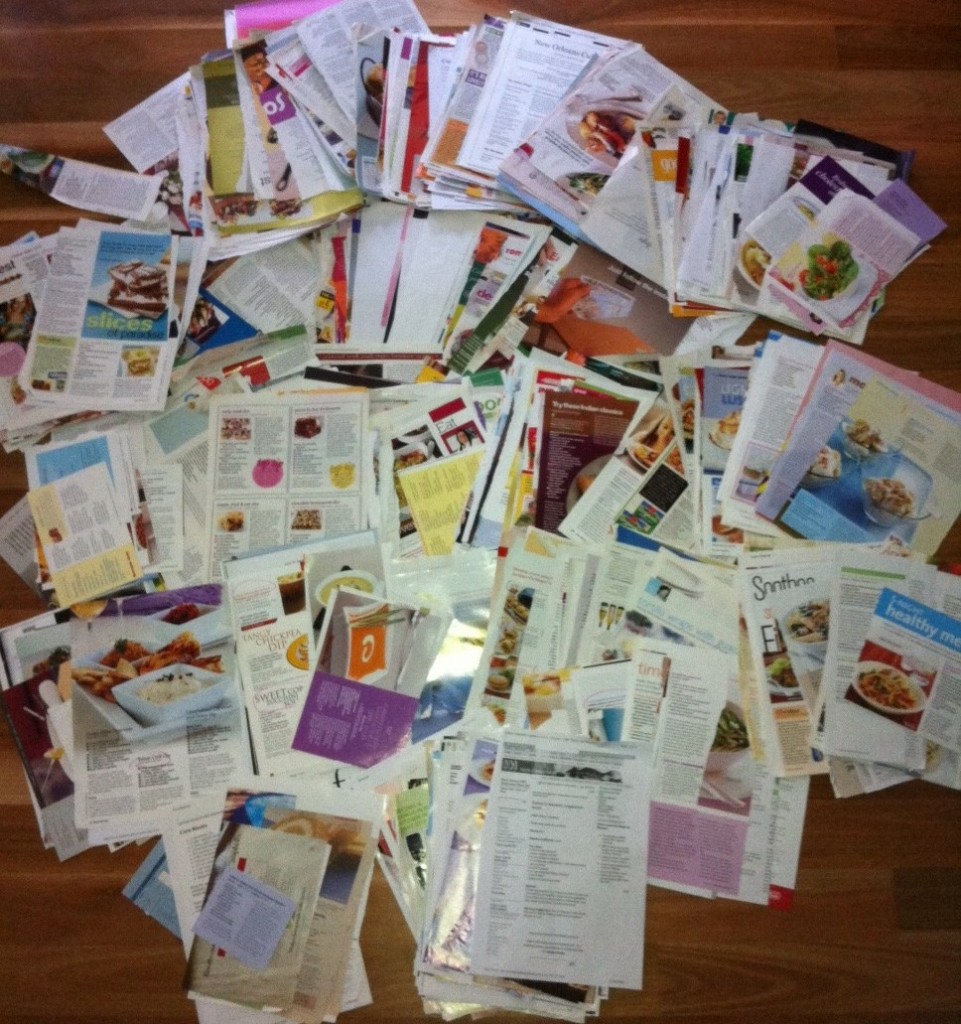 I headed to the shops and came home with the following supplies. 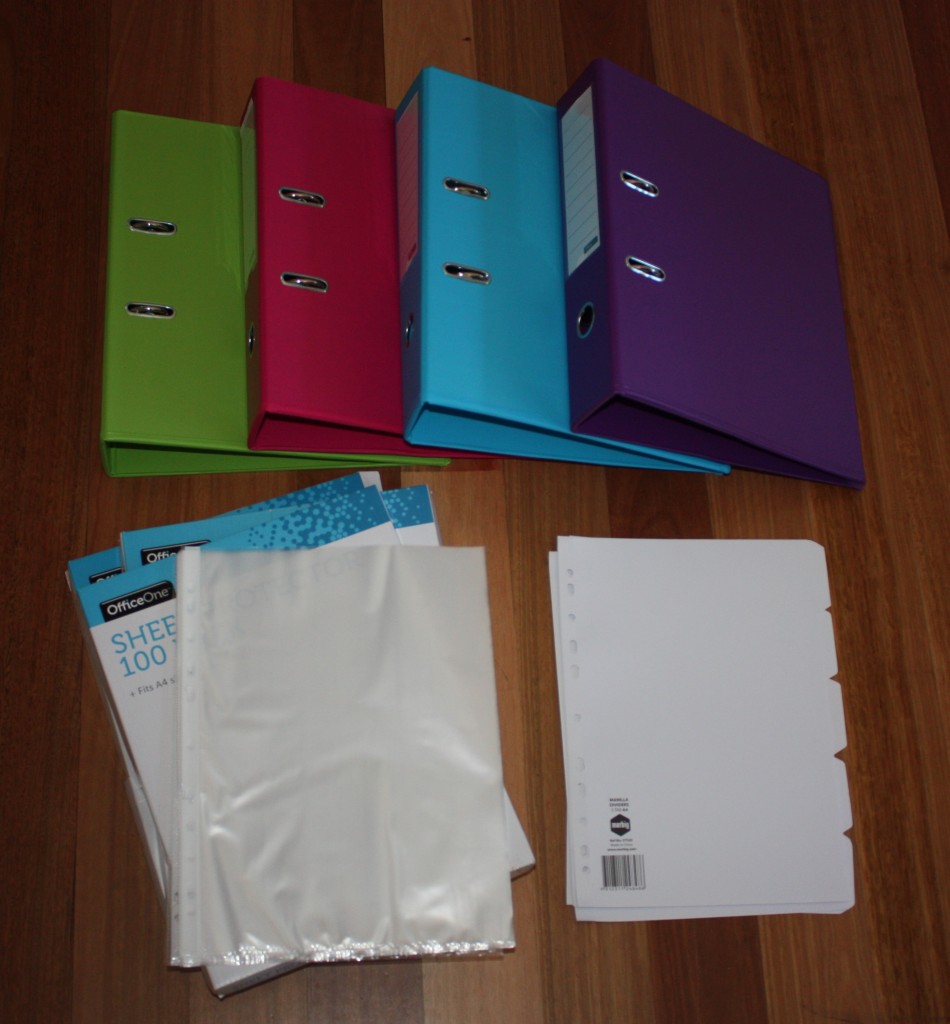 Coloured binders (Kmart, $3.50 each), A4 Plastic Sheet Protectors (Kmart $4.00 per 100), White A4 Tab Dividers (I had already had some but you can pick them up from any stationery store for less than $2 a pack)

I sorted all my recipes into categories and then placed each one in a clear plastic sleeve. I then placed similar recipes together and separated them with tabs, which I labelled.

I then labelled all of the binders, so I can see where everything is. 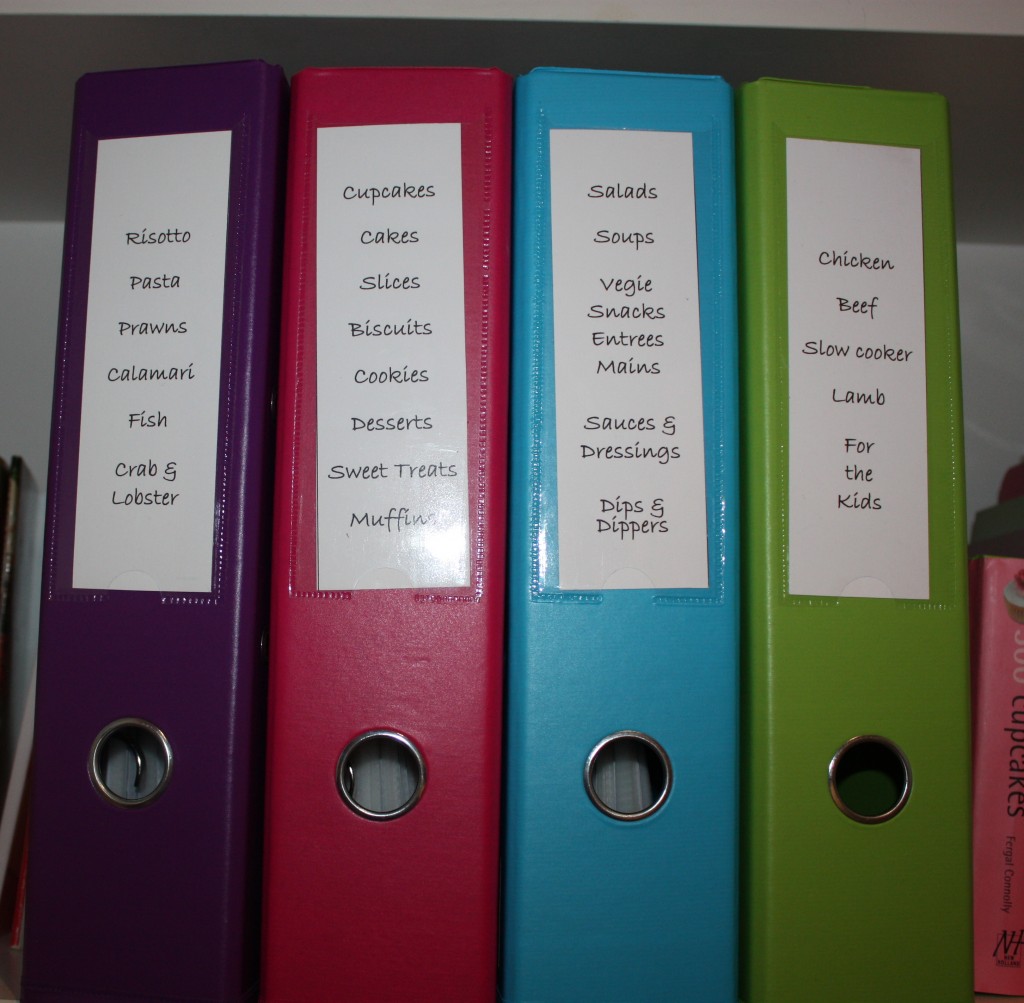 My plan is to try at least one new recipe each week and when I find one I like, I will type it out and refile it, so I can see which recipes I’ve already tried.

I was so happy to have finally organised my recipe collection, that I decided to clean out & sort my recipes books too. 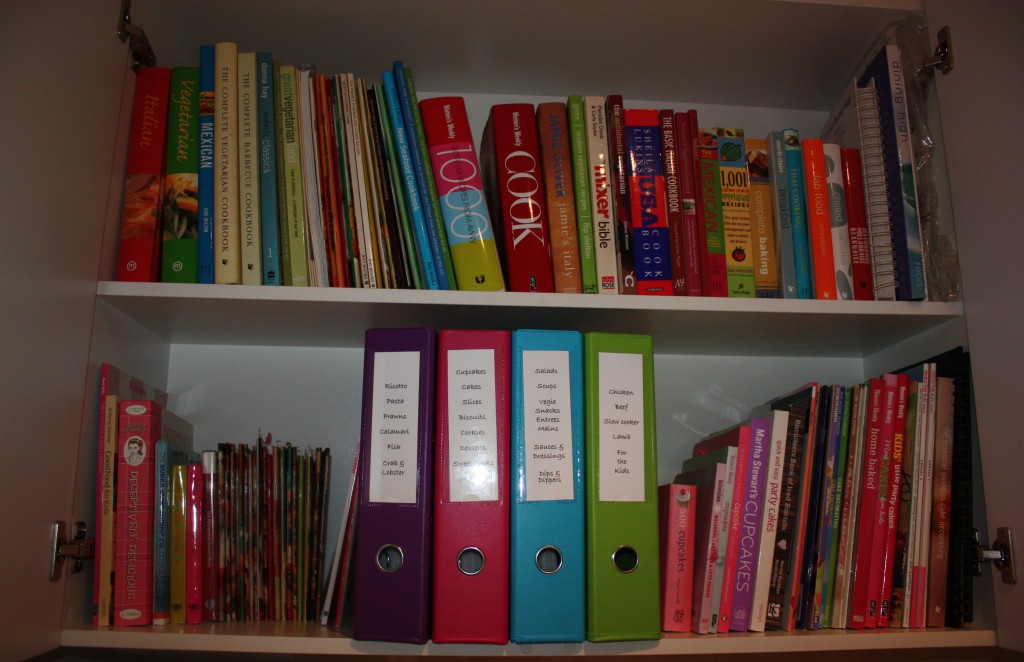 Now for the fun part – trying some new recipes.

Last weekend we celebrated my daughter’s 4th birthday with a rainbow party. I am by no means a party planner but I do love organising and I especially love doing things for my kids, and I’m so happy with how everything turned out.

It all started a couple of months ago when my daughter spied (caught) me on pinterest* looking at cakes. I had pinned a picture of a layered rainbow cake & when she saw it she declared “I want one of those mummy”. “No worries honey, I can make that for you” I replied (temporary moment of insanity number 1).

So began my journey to discover all things rainbow related and I’ve got to admit, it was heaps on fun. I eventually (kind of) let go of my obsession with finding only items that contained all 7 colours (in the right order, mind you – thanks ROY G BIV) and found some gorgeous items for the day.

I’m one of those people who likes to do everything (control freak??) – so I was up for the challenge of making a rainbow cake, rainbow layered jellies, fairy bread, rainbow fruit platters, choc bars, pots of gold, rainbow lollipop decorations, along with cakes for playgroup, daycare, a family party and the list goes on (temporary moment of insanity number 2). Thankfully, I did have some help along the way.

My daughter helped make the rainbow coloured jelly & she also sorted all the coloured chocolate balls into their separate colours (I was amazed that she sat still for so long AND she didn’t eat them all). My lovely husband made the heart shaped fairy bread (sorry, didn’t get a photo of that).

I’m thrilled at how well the cake turned out (phew!). I can’t believe how nervous I was when I cut into it for the first time – it was more nerve wracking than having a room full of people watching me cut my wedding cake and OH-MY-GOD it was soooo yummy!

Anyway, here are some pics of the party along with details of where some of the items came from. Enjoy!

*pinterest is an online pinboard that helps you organise and share pictures of things you love – it is also most amazingly fabulous time wasting obsession you will ever discover – find me on pinterest here – happy pinning !