Please note: all accounts of this day are not mine but are from those who were there on the day – my partner “A” (who is now my husband), doctors, police & emergency workers. I have no memory of this day or the days following.

My week had gotten off to a great start – I had just spent a fabulous long weekend in Lorne relaxing with A and I was on my way to work at my new job in the city,  that I had started the previous month.

As I sat stationary in my car at a red light on a freeway off ramp, I was rear ended by a drunk (*asshole*) driver travelling at approx 80-100km/h, who was heading home (at 8.00am) from a big night in the city.

My car was pushed into the car in front of me and was then launched (apparently airborne and flipped 180 degrees) into oncoming traffic. Another car travelling in the opposite direction then t-boned my car on the passenger side. Police later told us that witnesses said my car looked like it was bouncing around in a pinball machine.

When paramedics arrived, I was unconscious. I remained unconscious as they cut me from the car and transported me to hospital. Years later I spoke with a fireman who attended the scene (he ended up being related to someone I knew), and he still remembered my accident and said that they assumed when they arrived at the accident that they were going to be removing a body – my body – from the wreckage, as it was pretty bad. He told me how surprised they were to discover I was actually still alive. (I felt sick to my stomach when he told me this. I had no idea)

I was then rushed to the hospital, where they discovered I had a broken pelvis, internal bleeding, fractured vertebrae, and head, shoulder and foot injuries. I was pretty beaten up.

Somehow I managed to tell them the name of A’s work (apparently I couldn’t remember his phone number or last name) and they eventually tracked him down to tell him what had happened. I can only imagine how it would feel to receive news like this – especially when he’d only kissed me goodbye a few hours earlier. He then had to call my parents (who lived interstate) and tell them what had happened – he said it was the hardest thing he’s ever had to do.

Apparently when he arrived at the hospital, I was angry and upset because they had cut my clothes off me and I had been wearing my brand new skirt (obviously the bump to my head hadn’t affected my love of fashion) and was not happy about it.

My parents arrived soon after and stayed at my bedside for the remainder of the week.

During that time A and my dad went to the wreckers to collect my belongings from the car. When they arrived, the guys there were avoiding them and acting a little weird until A mentioned that he had just come from the hospital to collect my stuff and they were shocked, as they had assumed that whoever had been in my car had been killed (A assumed this was why they’d been acting a little odd when he got there). My dad took one look at the car and walked out  – A later told me, that my dad threw up when he saw what was left of my car.

The following month in hospital was a blur of pain, rehab and more pain. Lots of people came by to visit, some I remember, others I don’t. I hated being in the hospital and couldn’t wait to get home.

I haven’t included any pictures of what was left of my car here because some family members and friends have asked never to see them but here’s one of me in the hospital a few days after the accident. 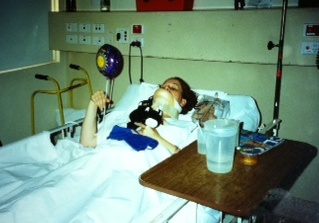 One of the hardest things for me following the accident was relearning how to walk.

It’s strange as an adult having to learn such a basic task – something that we do every single day without thought. One of my therapists told me that learning to walk as an adult is the most difficult thing a person can do. Even though it had only been a couple of weeks since I had walked, my body had been through so much trauma and was in so much pain that my brain was not sending the correct signals to my legs. It was so frustrating not even to be able to put one foot in front of the other.

After five weeks in hospital, I returned home in a wheelchair, with a walking frame (my grandma had one the same). I would continue to receive threatment as an outpatient three days per week.

I remember celebrating the day I walked from the front door to the letterbox (approx 15m) – I felt like I had run a marathon – even though I had used the frame. I soon graduated to a walking stick (which made me really self-conscious – why was everyone staring at me?) and I used that for another couple of years.

It was nearly four years before I began to walk “normally” – ie without a limp. I had walked for so long with a limp that my brain thought that was my normal walk and even when then pain lessened, I still walked the same way. It took lots of rehab and walking in front of a mirror (for months and months), to retrain my brain into allowing me walking normally.

For the next few years I regularly attended rehab and a pain management program and had counselling as I became depressed and wasn’t coping very well with the pain, and how much my life had changed and the effect it had on my personal and professional life.

It took awhile for me to realise how lucky I was to have survived that day and that my injuries could have been a lot worse.

I was so fortunate to have such a wonderful and caring partner and be surrounded by family and friends who loved me. I could not have gotten through this without them.

I still have days where the pain is more than I can bear and I get angry and think “why me?”. But then I think about what could have been and realise, I am the LUCKIEST person in the world.

Nothing beats sitting down with a good book and a

Perfect day for kite flying (or drying the laundry

Someone in my house was VERY excited to get a copy

This is the first book I have read by @kelrimmerwr

Day 2 of the school holidays and my kids were “b


Error: API requests are being delayed for this account. New posts will not be retrieved.